As you know, in a C2 exam interaction you are expected to be able to:

These examples taken from political satire Yes, Minister can provide you with some (very) formal language you may use in your interactions.

The whole premise of the show is based on power plays and dynamics: the Minister is supposed to be the most powerful person in the room, as he holds political power; and yet, he finds it really hard to beat Sir Humphrey, the Permanent Secretary of the Department of Administrative Affairs (effectively, the head of the Civil Service). Sir Humphrey is supposed to be working under whoever happens to be the Minister at the time, but his is a tenured post: he is able to keep his position regardless of the party in Government. And in fact his main goal tends to be to talk Ministers into doing whatever he wants them to do. More often than not, then, the actual measures put in place tend to be Sir Humphrey’s ideas rather than the Minister’s original plans. Finally, there is also Bernard, the Minister’s private secretary, a much quieter person.

In the scenes below, the two speakers have opposing interests: the Minister wants to reduce the number of civil servants to cut down on expenses, while Sir Humphrey strenuously objects to that idea. As you will see, the Minister, as the person in a position of superiority, starts using more straightforward language (goes to the point), while Sir Humphrey resorts to politeness formulae and to his mastery of the language to baffle and confuse the Minister.

(Click on the CC icon to activate the subtitles in English)

Please pay attention to the examples of formal language used in the clip:

Even within this extremely formal context, the Minister still uses question tags and fillers (you know) to emphasise his points. This contributes to the conversation being more interactive, not one monologue after another. [Please note that Humphrey does not use them, as he is addressing his superior, but in a conversation between peers, or from a top-down position as here, question tags can help you interact with other speakers. ]

However, the tables are turned when the Minister later decides to play Sir Humphrey at his own game, by answering questions in Humphrey’s own roundabout way.

(Click on the CC icon to activate the subtitles in English)

Please also note the use of a passive sentence to minimise the impact of the accusation Humphrey is making: instead of going bald on record and say ‘ you are hiding the content of the report from me’, he opts for indirectness: ‘affairs are being conducted in a way, which …’.

In this clip from Staged (2020), you can find another example of the expression ‘in the fullness of time‘ being used in context. In the clip, American actor Samuel L. Jackson and Scottish actor David Tennant play versions of themselves, trying to solve a professional conflict via video call while under lockdown. As you will notice, the register here is not exactly formal, but quite the opposite.

You can find below some examples of persuasive language in negotiations taken from TV shows:

Dr. Alison Cameron feels her male colleagues and boss do not take her professional opinions seriously enough, so she has to resort to linguistic resources to try and delude them into thinking that her ideas are actually theirs.

Two senior members of the committee organising the London 2012 Olympics meet two secretaries from Clarence House (The Prince of Wales’s household) to look at ways of linking the 2012 Olympics with the Queen’s Diamond Jubilee celebrations (the 60th anniversary of the Queen’s accession to the throne). They have to negotiate and reach an agreement that both parties may find satisfactory and that suits their needs.

Watch the video with subtitles in English here

*Siobhan (the blonde woman in the blue dress) is not the ideal role model for an interaction: she uses way too many fillers (and too informal for her role, actually-she probably wants to sound young and trendy, but she overdoes it): cool, totally, sure, here’s the thing…Besides, she is not very good at listening (which is something you should also do when interacting- listen to what your partner says and respond to that) or at using turn-taking strategies (she keeps interrupting, and as a result she is frequently interrupted or refused the right to speak in return).

Listen to some short extracts from interviews with world-famous writers. Match each extract (1 – 6) with the best heading (A-H) and write the letter in the appropriate box. ONE of the headings does not correspond to any of the extracts. The first extract is an example. You can listen to the clips twice.

Prince Harry and Meghan Markle, the Duke and Duchess of Sussex, announced their decision to step down as senior members of the Royal Family last week. As it happens, I am dealing with current affairs and the media in my C2 classes. And as of next week, we will be talking about diversity and inclusion, tackling some aspects of race relations. That is why I decided to use this news story as an excuse to design some activities to link both units.

2. Read the following opinion article on the treatment that the tabloids (and the media in general) have given to the couple, and especially, to Meghan Markle as mixed-race (source). Some sentences have been removed. Choose from sentences A-G the one which fits each gap (1-6) best. There is an extra sentence which you do not need to use.

The text includes a wide range of vocabulary, with some expressions which might actually be interesting to include in your wordstock; however, they may make it harder for you to understand the text. Should you have any trouble, you can click on this interactive version of the text on Thinglink: 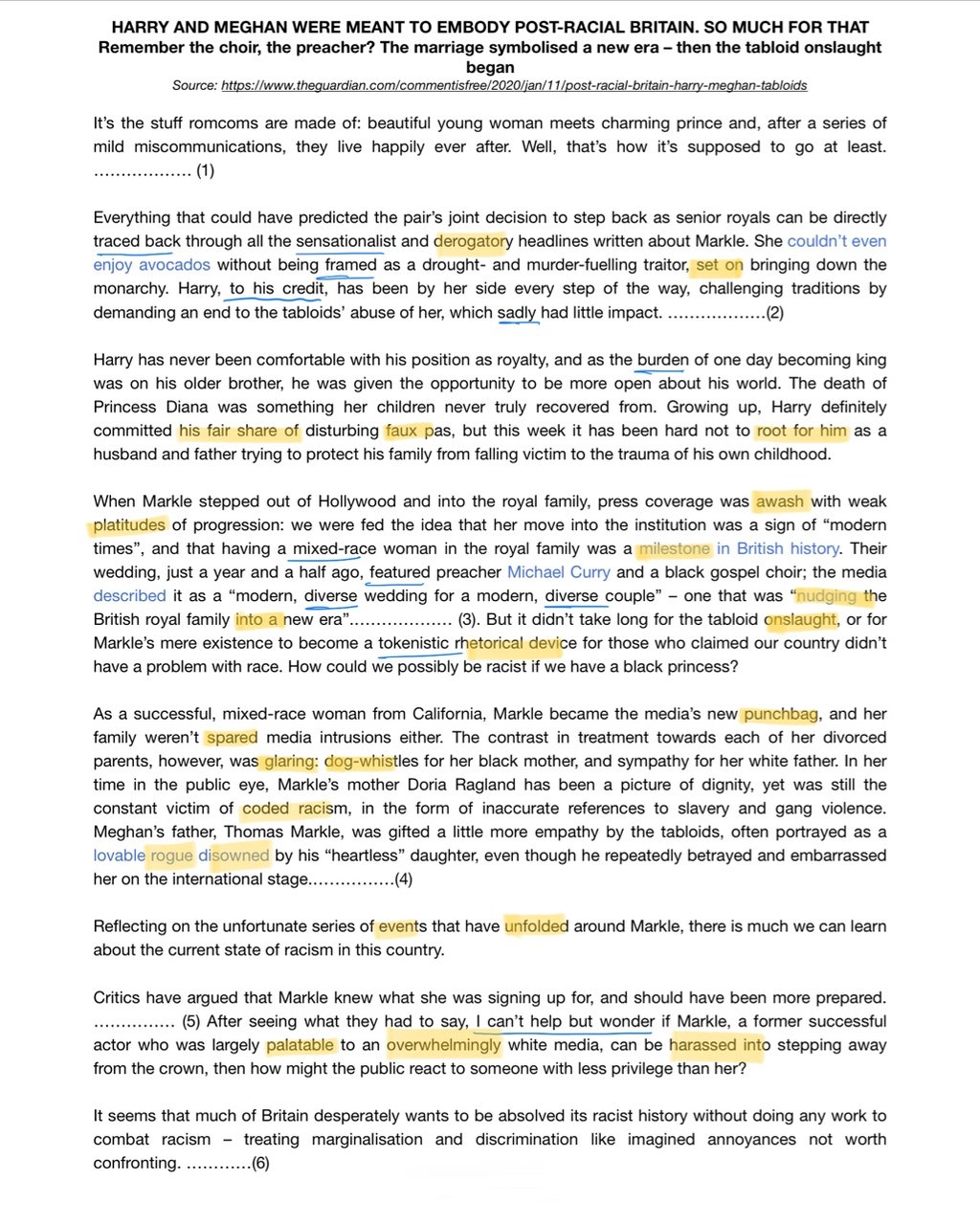 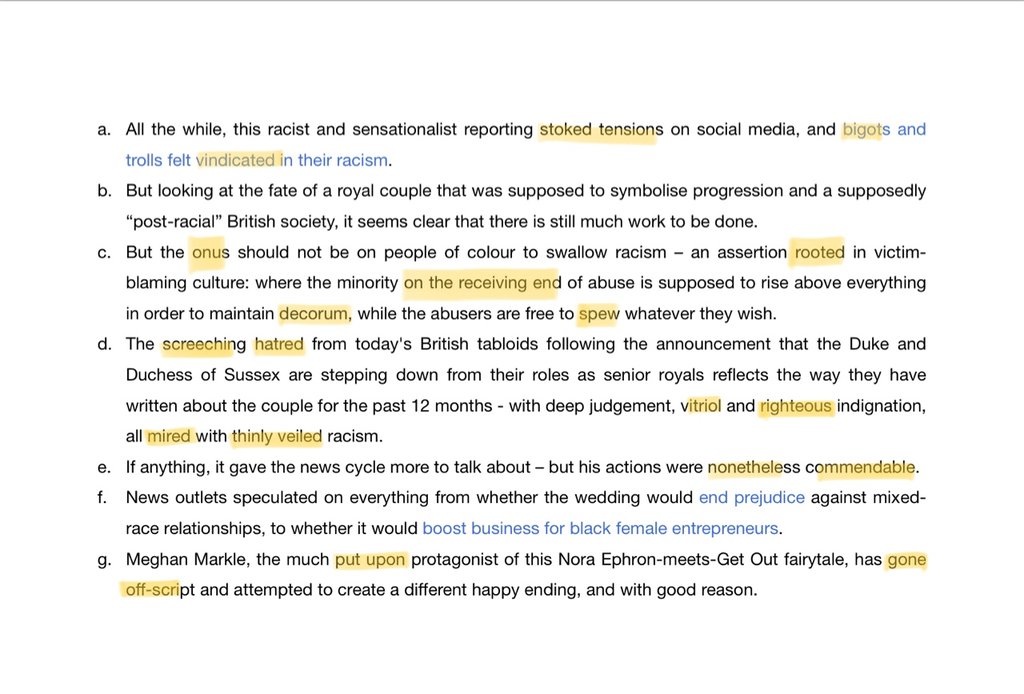 3. Mediation in writing: You are a team of journalists working for El País in English. You have been asked to write a news story for their website on Harry and Meghan stepping down as senior royals.

El País is a serious newspaper. Therefore, they tend to use:

Read the following source https://www.thesun.co.uk/news/10721340/queen-arrives-church-summit-meghan-harry/ and select the relevant information

Download the pdf version of the source article (text only)

4. Follow-up: Share your views on Twitter. Use the hashtag #Megxit to be part of the conversation. [I opened a shared Twitter account for my students so that they would not need to use a personal account. Using Twitter provides real online interaction, and it seems only natural to use social media when discussing ‘the media’ in 2020].

Listen to this clip from BBC Radio 4 Woman’s Hour, where two speakers exchange their views on New Year’s resolutions. For questions 1-6, choose the best answer (a,b or c). You can listen to the clip twice.

Listen to this news report about a new measure that Instagram is trialling in an effort to silence criticism that it has a negative effect on users’ self-esteem.