Christmas is around the corner. In the run-up to Christmas, businesses and brands release their very best ads, typically tearjerkers, to catch consumers off-guard and lure them to shop till they drop. I’m well aware of their persuasion strategies, of course. And yet, every year I find myself having a look at British Christmas ads, as they tend to be longer, and usually tell a story, which will allow me to exploit them in the classroom even further than ordinary ads. This is a selection of the ones I liked the most this year:

a rendition of Queen’s ‘Somebody to Love’ by real shopkeepers struggling to survive in the high street.

Alternative version- shopkeepers singing All I Want for Xmas is you

Set in Dickensian London, it showcases the story of a waif-an orphan child and chimney sweep, unfairly accused of stealing.

Resources: the ad is set in Victorian England/Dickensian London. Some related vocabulary may be useful to start with: 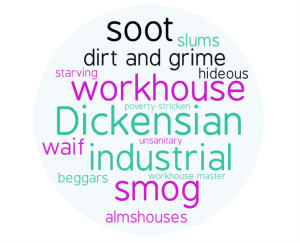 Click on the image to open the word cloud. Links to definitions can be found by clicking on each word.

Resources to use the ad in the classroom:

Watch the ad and write down as many foods, gifts and Christmas traditions as you can.

Aldi-Kevin the Carrot #4 (Let Me Entertain You):

Resources to use the ad in the classroom: The Literacy Shed

Smyths toys– If I Were a Toy

You can find below a collection of resources which can be used when dealing with Black Friday and consumerism: 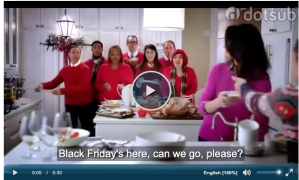 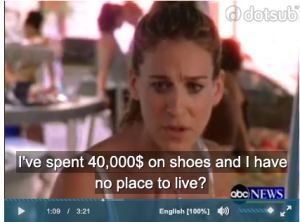 How to differentiate deals from duds on Black Friday (B2):

Some months ago, there was a consultation in the UK about the candidates to feature on the new £50 banknotes. You can read more about it and do a listening comprehension exercise on the news here:

The winner has been announced, and mathematician Alan Turing has been chosen as the face of Britain’s new £50 banknote.

Now, read the questions in the form below. Then, listen to this news report about the mathematician who is going to feature on the new £50 note. You can listen to it twice. Once you have finished, submit your answers to check whether you were right or wrong. Please pay attention to the feedback to both right and wrong answers.

Open form in a new tab

You can also read the transcript here.

More about Alan Turing in the blog:

Listen to this news report about the new 50 GBP note. Read the sentences on the Google form below and listen carefully to the recording. In each of the spaces provided, complete the information required with up to FOUR WORDS. You should hear the information twice.

Once you have finished, you can listen again and read the transcript.

If this consultation should happen in Spain, who should the contenders be?

Listen to this clip where an expert discusses the issue of fuel poverty, and gives advice on how to save money on energy bills.

Then, try this vocabulary exercise, which includes some of the useful expressions mentioned by the host and guest. Once you have checked your answers, you can listen to the clip again, to find those expressions in their context.
Open form in a new tab

Listen to this clip where an expert on online fraud discusses online scams on Black Friday. Then answer the questions below: